Major General Isaac Brock died during the Battle of Queenston Heights in 1812.

A sculpture of Major-General Brock is on the grounds of Brock University.

He was killed on the battlefield.

The sculpture is worth seeing as Canada marks 150th year of Constitutional Monarchy.

His gallantry on the battle filed has endeared him to Canadians 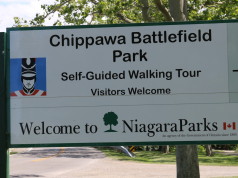 Canada 150 – The Battle of Chippawa