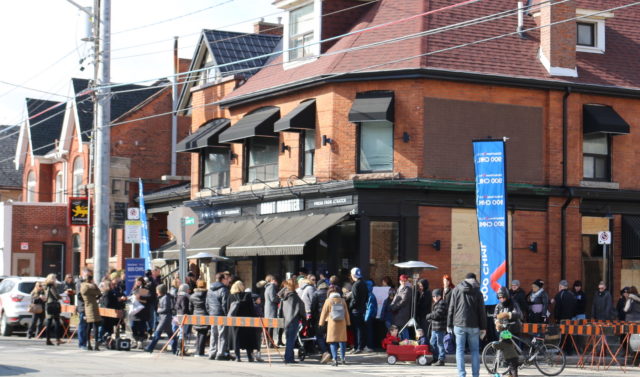 Businesses on Locke Street in Hamilton were shown love on #LOVELOCKEDAY, an event organized to show solidarity with business owners following the destruction of their property by a group of anarchists.

The businesses recorded long lines and sold quite a lot of their products to patrons who came to the event in defiance of the vandalism suffered by the front stores. There were boards covering the damages done to the front windows. The boards carried various messages including “Hamilton Stick Together.”

The destruction according to reports was a culmination of brewing anger of some locals who do not believe in the economic revitalization of the neighborhood.

The Tower, an anarchist group in Hamilton has denied on facebook posting that its members carried out the attack, but supported the spirit of the attack.

“First, no, the actions on Locke and Aberdeen on Saturday night were not organized by the Tower, but yes, we support what happened and are in solidarity with th..”

The protest was against the gentrification of Locke Street.

The Hamilton Police is still investigating the incident to bring the perpetrators to justice.

The #LOVELOCKEDAY was organized to reassure the business owners and make investors in the area feel welcomed.

The leader of Ontario NDP Andrea Horwath, who resides in Hamilton, said the event showed the community would not be intimidated. It was a demonstration of support for small businesses in the area.

Monique Taylor, MPP Hamilton Mountain was at the event to show her solidarity.