Having lived in Canada for over half a year and now working as a Settlement Counselor and Chinese Language instructor at Folk Arts Multicultural Centre, I am often asked the same question by people from different cultures: “Do you speak Chinese, Mandarin or Cantonese?”   In the Canadian context, this would be comparable to asking: “Do you speak Canadian English, Ontario English or Newfoundland English?”  Please excuse the possibly silly analogy, but it underscores my point.

Let’s take a “cultural tour” of the Chinese language and clear up some myths:

As one of the most ancient civilizations, with over five thousand years of history, the term Chinese language serves as an umbrella so to speak of languages spoken by Chinese people – including thousands of dialects contained within.  In addition, there are minority languages, comparable to First Nation languages found in Canada.

Next to Mandarin, Cantonese happens to be the second widely-spoken means of communication in China, but the fact remains it is a dialect, not a language; much the same as Australian English, American English, Canadian English, and etc. where at one time considered dialects of British English.

Mandarin, known as Putonghua (common language) in Chinese, is the modern, standardized national language of China.  It derives largely from the pronunciation of the Beijing dialect. It is spoken by about two-thirds of the Chinese population and is used as the official language for almost all government functions and TV / radio media broadcasting.

Cantonese is spoken by people mostly from the southern coastal regions such as Guangdong (also referred to as    Canton), Hong Kong and Macao.  One reason that Cantonese is thought by Westerners to be a language – as opposed to a dialect – is that in earlier times many Chinese people had emigrated to and resided in other countries from areas of China in which Cantonese served as the daily communicative tool. Also, due to economic prosperity and the highly-developed entertainment industry in Hong Kong, Cantonese has been widely introduced in movies, TV plays and popular songs, making it more influential and well-known overseas.

For about ten years, Mandarin has been largely promoted in traditionally Cantonese-speaking Hong Kong, a special administrative region of China. Nowadays, Mandarin plays an important role on formal occasions throughout China, even around the world. Mandarin is the mainstream language used and understood by most Chinese people. However, whether or not their pronunciation is “perfect and beautiful” is another story insofar as in daily life people speak different regional dialects, often simply because it’s more comfortable to do so.

As two major branches of the Chinese language tree, Mandarin and Cantonese definitely have distinct differences in oral pronunciation, but as for the written form of Chinese characters, known as “Han-zi, it is the same.  In terms of writing, confusion surrounds simplified Chinese and traditional Chinese. In general, simplified Chinese has been used officially in mainland China since 1955, while traditional Chinese is still mostly used by people in Hong Kong and Taiwan.

Next time, when you meet a new friend from China, you’ll know for sure s/he speaks Chinese.  The only thing you might need to clarify is:  “Do you usually speak Mandarin or Cantonese.” 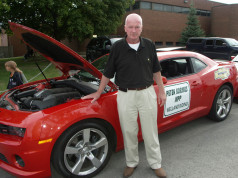 Kormos-political pugilist of the voiceless